If I Were a Passenger, I'd Want to Sue

A conflict between passengers at Lindbergh Field Tuesday night caused the overnight delay of an American Airlines flight headed to Chicago.

Flight 590 was scheduled to depart at 11 p.m. for Chicago O'Hare International Airport but was rescheduled for Wednesday at 10:15 a.m. after some kind of dispute among customers started at the gate and continued onto the plane, said American Airlines spokesman Tim Wagner.

"While Wagner said it is the airlines policy not to disclose any information about their passengers, televised reports claimed that the incident involved a group of six to seven Iraqi Americans and another passenger who was apparently uncomfortable that the men were speaking in Arabic.

The jet left the gate at 11:14 p.m. but did not take off and instead returned at 11:26 p.m. after a traveler with a child elected to get off the plane, Wagner said."

Gonzales Resigns, If Chertoff Becomes AG, What of Peter King?

Department of Homeland Security boss Chertoff is one of the possibilities to replace the disgraced A.G. Alberto Gonzales.
Would King like to head Homeland Security?
Would he be considered by Bush?
Is a 500 day tenure be worth it to King because after the 2008 elections, King wouldn't be asked to stay on.

Congress is in recess but we have some interesting things to post shortly.
But for now, a movie...

King tries to explain Guliani flip-flops on major issues and ties himself into a knot.

A Little Movie About an Enduring Love Affair

from our friends at nastyletters.

A Funny that King Won't Laugh at.

6 Years ago George W. Bush was presented with a security briefing entitled "Bin Laden Determined to Strike IN U.S."
He ignored it. 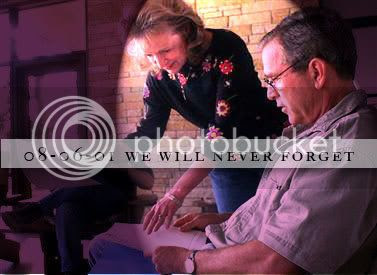 Clandestine, foreign government, and media reports indicate bin Laden since 1997 has wanted to conduct terrorist attacks in the US. Bin Laden implied in U.S. television interviews in 1997 and 1998 that his followers would follow the example of World Trade Center bomber Ramzi Yousef and "bring the fighting to America."

After U.S. missile strikes on his base in Afghanistan in 1998, bin Laden told followers he wanted to retaliate in Washington, according to a -- -- service.

An Egyptian Islamic Jihad (EIJ) operative told - - service at the same time that bin Laden was planning to exploit the operative's access to the U.S. to mount a terrorist strike.

The millennium plotting in Canada in 1999 may have been part of bin Laden's first serious attempt to implement a terrorist strike in the U.S.

Convicted plotter Ahmed Ressam has told the FBI that he conceived the idea to attack Los Angeles International Airport himself, but that in ---, Laden lieutenant Abu Zubaydah encouraged him and helped facilitate the operation. Ressam also said that in 1998 Abu Zubaydah was planning his own U.S. attack.

Ressam says bin Laden was aware of the Los Angeles operation. Although Bin Laden has not succeeded, his attacks against the U.S. Embassies in Kenya and Tanzania in 1998 demonstrate that he prepares operations years in advance and is not deterred by setbacks. Bin Laden associates surveyed our embassies in Nairobi and Dar es Salaam as early as 1993, and some members of the Nairobi cell planning the bombings were arrested and deported in 1997.

Al Qaeda members -- including some who are U.S. citizens -- have resided in or traveled to the U.S. for years, and the group apparently maintains a support structure that could aid attacks.

Two al-Qaeda members found guilty in the conspiracy to bomb our embassies in East Africa were U.S. citizens, and a senior EIJ member lived in California in the mid-1990s.

A clandestine source said in 1998 that a bin Laden cell in New York was recruiting Muslim-American youth for attacks.

We have not been able to corroborate some of the more sensational threat reporting, such as that from a ---- service in 1998 saying that Bin Laden wanted to hijack a U.S. aircraft to gain the release of "Blind Sheikh" Omar Abdel Rahman and other U.S.-held extremists.

Nevertheless, FBI information since that time indicates patterns of suspicious activity in this country consistent with preparations for hijackings or other types of attacks, including recent surveillance of federal buildings in New York.

The FBI is conducting approximately 70 full-field investigations throughout the U.S. that it considers bin Laden-related. CIA and the FBI are investigating a call to our embassy in the UAE in May saying that a group or bin Laden supporters was in the U.S. planning attacks with explosives.
Posted by J at 11:40 PM No comments:

Just when you thought Peter "Baghdad is just like Downtown Manhattan" King could get any worse after voting against children's healthcare, today he votes against mandatory rest between deployments for soldiers.
You would think that "Geez, it's common sense to want soldiers to have some rest before they are redeployed to a combat area."
But for Peter King and 189 other republicans voted against HR3159 Ensuring Military Readiness Through Stability and Predictability Deployment Policy Act of 2007.
It has become too common for soldiers returning to have very little time to rest before be redeployed - sometimes for a 3rd and 4th time - back to a combat area. It is time the soldiers who put their lives on the line every day get to spend time with their families and in too many cases get to know their newborn children or new spouses.
For King to vote against this bill just shows how little he thinks of the men and women who serve this country.
Here is the common sense idea from the bill:
"IN GENERAL- No unit of the Armed Forces specified in paragraph (3) may be deployed in support of Operation Iraqi Freedom unless the period between the most recent previous deployment of the unit and a subsequent deployment of the unit is equal to or longer than the period of such most recent previous deployment."
Exemptions- The limitations in subsections (a) and (b) do not apply--

(1) to special operations forces as identified pursuant to section 167(i) of title 10, United States Code; and

Definitions- In this Act:

(1) DEPLOYMENT- The term `deployment' or `deployed' means the relocation of forces and materiel to desired areas of operations and encompasses all activities from origin or home station through destination, including staging, holding, and movement in and through the United States and all theaters of operation.

(2) UNIT- The term `unit' means a unit that is deployable and is commanded by a commissioned officer of the Army, Navy, Air Force, or Marine Corps serving in the grade of major or, in the case of the Navy, lieutenant commander, or a higher grade.

(g) Effective Date- This Act shall take effect on the date of the enactment of this Act."

King and 193 other republicans voted against the`Children's Health and Medicare Protection Act of 2007'.
HR 3162 To amend titles XVIII, XIX, and XXI of the Social Security Act to extend and improve the children's health insurance program, to improve beneficiary protections under the Medicare, Medicaid, and the CHIP program, and for other purposes is pretty straight forward with its intent on providing health care.
What does Peter King have against children getting treated by a doctor?
The stated purpose of the bill is to "... provide dependable and stable funding for children's health insurance under titles XXI and XIX of the Social Security Act in order to enroll all six million uninsured children who are eligible, but not enrolled, for coverage today through such titles."

I guess with his own congressional, taxpayer-funded healthcare, King doesn't care about uninsured children.
And that is just plain wrong.

Reports are that a suspicious envelope cleared out Kings office this afternoon. The envelope was delivered with the words "ammonium nitrate" and "homeland security" written on it.
King has gotten behind the effort to regulate the sale of ammonium nitrate which can be used as a main component of a improvised bomb. Timothy McVeigh used ammonium nitrate to blow up the Murrah federal building in Oklahoma City. President Clinton made a push to regulate the sale of ammonium nitrate but got resistance from the republican-led congress.
The opposition to the regulation have no leg to stand on and now some wacko may be making threats.