More on King, Rangel and Palin

The kerkuffle over Rangel calling Palin "disabled" is really a little stupid.
Interviewed by Marcia Kramer of WCBS-NY, Rangel said "You got to be kind to the disabled" and followed up with "There's no question about it politically. It's a nightmare to think that a person's foreign policy is based on their ability to look at Russia from where they live."
Clearly Rangel was saying there is something wrong with Palin for saying proximity to a foreign country makes you an expert on foreign policy.
That didn't stop King from jumping all over the statement when Kramer raced to his Massapequa Park to show it to him "We should be sensitive to her or any woman who has a child or family member who has any affliction at all. And so to use the word disabled in the context of a female candidate for vice president who has a child who is disabled really is wrong. Charlie owes her and the entire disabled community and apology."

No Peter, the CONTEXT was Palin making a ridiculous claim. It has nothing to do with her child.
Maybe Rangel needed to be a little more politically correct (he didn't call Palin retarded which is good) but his point is vaild.
Maybe he should have called Palin a dumb-ass. But that would have brought the ire of King too since he belongs to a political party full of dumb-asses and he suffers from that affliction himself.

Rangel shot back at King and his detractors "Governor Palin is an obviously healthy person who in no way fits the description of disabled. I meant to say then, and I am saying now, that she entered the campaign with a disadvantage in the area of foreign policy."
"Any inference that my words were in any connected to her son, Trig, who was born with Down syndrome, is a real stretch -- and, I would have to think -- a way to make political points out of my poor choice of words."

Of course King is the very last person to demand apologies. King has no problem verbally attacking people.
Kinda like when he attacked opponents of privitization of social security. He said of a Rabbi, a Quaker and a leader of The Long Island Council of Churches "I base my decision on facts, reason and informed social conscious and not left-wing pseudo-theology."
Is the Quaker belief a "left-wing pseudo-theology?"
Is Judism?
King never apologized for that.
And let's not forget Kings assault on The Islamic Center of Long Island and saying there are too many mosques in this country.

The long and short of it is that King is full of fake outrage and what Rangel said was not politically correct.
Palin is a dumb-ass for her silly resume padding. That can't be argued.

Congress Daily reports "House Republicans and Homeland Security officials sounded alarm bells Wednesday about the prospect of the Homeland Security Department operating under a continuing resolution in the new fiscal year, citing the impact that such a move would have on several programs."
"Without an appropriations bill, DHS can't move forward on plans for the border, new cybersecurity programs, grants for states and locals [and] the list goes on," King said in a statement. "It's unacceptable to have DHS in a holding pattern just because Democrats can't get their act together."

Well, that isn't exactly true now is it, Peter?
"But after the hearing, the department was unable to provide a list of specific programs that could not be started or would be seriously disrupted if the department has to operate under a CR."

Right, so it's a crisis but no specifics.
Sounds like DHS to me.

"The only effort the official could cite that might be affected is the department's ability to begin construction on a new headquarters facility in Washington, D.C."

Who is Running For President, Peter?

King went off spouting on WCBS-TV about Rep. Charlie Rangel's comment about Sarah Palin and said "This is just another liberal Democrat who can't accept an independent woman running for president."
Well.... Sarah Palin is running for VICE-President.
And...ummm.... "liberal Democrats" were behind Hillary Clinton for President to the tune of 18million votes.

What Democrats and most intelligent people can't accept is that the serial liar Sarah Palin could be vice-president.

The hacking of VP candidates Sarah Palins private e-mail account need to be investigated and the "anonymous" hackers need to be prosecuted.
That being said, I had a chuckle from King's remarks to the NYPost about this "Hacking strikes at the heart of our democracy. You can't go invading someone's privacy that way."
Yes, "hackers" can't invade someones privacy by the government can according to King.
King supports warrentless wiretaps. He believes that the government does not need to follow the law and have just cause to listen in on your phone calls. King also supports provisions in the so-called "Patriot" Act which allows the government to find out what library books you check out.

What "strikes at the heart of our democracy" Peter is the attack on the constitution in the name of "homeland security." An attack you fully support. Don't talk about "privacy" when you have shown little regard for it.

How do King's union supporters feel about King voting against the "Emergency Extended Unemployment Compensation Act of 2008"?

The Emergency Extended Unemployment Compensation Act would provide economic relief for Americans looking for work.
Extends Unemployment Insurance for 13 weeks nationwide and for 26 weeks in high unemployment states - those with 6% unemployment or higher.
According to the Congressional Budget Office, this would provide relief for 3.8 million Americans.
49,000 American jobs were lost in May, the fifth straight month of job losses.

King doesn't think the little people need help.
It's great to be the King when you use campaign funds to pay for your car. Everyone else has to pay for their own cars out of their own pockets.

It's right across the street from last years HQ on N. Broadway in N. Massapequa. 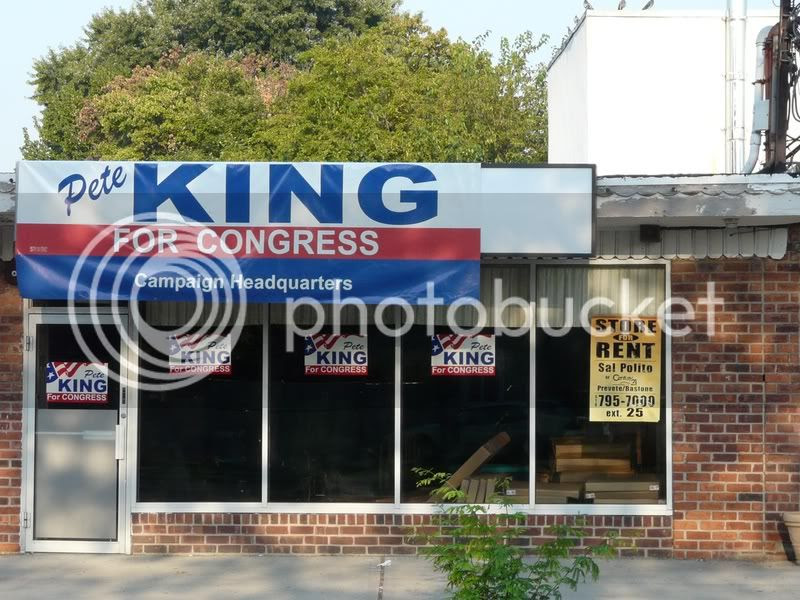 Republicans Politicize 9/11 at Convention as King Stands By Silently

During last weeks republican convention, just minutes before McCain was to accept his parties nomination a "Video Tribute" to 9/11 was played. Far from being a "tribute", it was the most disgusting use of 9/11 for political purposes to date.
The New York Delegation to the convention which included Peter King did not raise one objection to the video and that is a testimony to who they really are.
As we remember the victims tomorrow, let's also remember that playing politics with tragedy is dirty business.
Here is MSNBC's Keith Olberman's "Special Comment" from his show this evening....

King was on MSNBC's Hardball Tuesday night. He faced off with Florida Congresswoman Debbie Wasserman-Schultz who got him all riled up. Host Chris Matthews even tried to get King to tell the truth but King would have none of that.
I'll have the transcript up and video clips of choice comments shortly.
In the meantime, here is the entire segment...

Perennial republican primary candidate Robert Previdi challenges King once again.
And I thought I was tenacious.

And it's not Senator Barack Obama.
From The Hill newspaper in 1997, "He has a tremendous sense of self-righteousness and moral superiority."
King said that about John McCain.
McCain responded "I have never met a single other Republican who felt that Mr. King spoke for the party or for any Republican other than himself. Indeed, the only 'Republican' organization I have ever noticed Mr. King represent is the Irish Republican Army."
and
"... there is little in Mr. King’s singularly unimpressive legislative record to suggest that he is motivated by anything other than a compulsion to utter provocative sound bites."
Posted by J at 5:53 AM No comments:

We reported back in July that King was trying to get an IRA thug out of jail on bail. This guy escaped from a British prison 25 years ago and was caught and is to be deported by the Department of Homeland Security finds a friend in Peter King.
The Belfast Telegraph reports "An American immigration appeals court has upheld Maze escapee Pol Brennan's bail denial, just weeks after three US Congressman wrote to the Department of Homeland Security calling for the Ballymurphy native be freed on bond.

In its ruling this week, the Board of Immigration Appeals in Falls Church, Virginia, agreed with a Texan judge's April ruling that Brennan is a danger to society.

The court said his 1984 entry into America using an alias, and his subsequent purchase of a targeting pistol using the alias, proved that he has criminal tendencies. The court also cited his 2005 misdemeanor assault conviction after a builder allegedly refused to pay Brennan $1,000 in back wages."

The guy was here ILLEGALLY back in 1984.

Don't be fooled by Peter King's tough anti-terrorism talk.
Don't let him talk his way out of it.
From the Sunday Times March 2, 1997 "Here, on the one hand, was a Republican congressman on record as supporting terrorists. After the IRA killed nine police officers in Newry in February 1985, King issued this statement: "I support the IRA, though I do not support everything they do. Politically, it would be safer for me to simply criticise the vices of the British security forces. But if I am to be true to my conscience, I have to say that I am a supporter of the IRA."

King at the Convention: Dumb and Dumber Part 1

King is so wrong so many times it's hard to keep up. He had this gem about the choice of Palin as reported by the Daily News "She will tap in to a lot of the disaffected Hillary Clinton voters who are still angry about how she was treated by the Democratic Party."

WHAT???? Can King be that dumb or is he just shoveling more of his usual BS.
I'm trying to figure out how Hillary voters who are pro-choice, pro-gun control, pro-equal rights, and support just about every Democratic liberal platform would vote for Palin who is anti-choice, pro-guns, anti-gay, and just about every far right position you can take.
Yeah, they'll flock to Palin.
Sheesh.